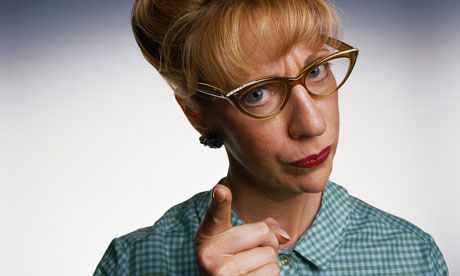 I had the honor of watching a screener of VAXXED: From Cover-Up to Catastrophe a few nights ago and I have been simmering on the thought of what I should say about it that hasn’t already been said.  You can read incredible reviews here, here, here, here, here and here that say most everything I would say, to tell you the truth.

But… I’m not about to say nothing, especially in the face of Paul Offit writing a “review” of the movie for The Hollywood Reporter without ever mentioning that he is portrayed in an unflattering light in the movie itself. Since Offit has a rich history of forgetting to disclose his conflicts of interest that omission is not surprising.  Not to nitpick, but the fact that Offit questions whether or not the CDC Whistleblower Dr. Bill Thompson was recorded without his knowledge leads me to believe that Offit did not watch the film, or he somehow missed the large written disclosure in the beginning that stated Thompson did not know he was being recorded– not that we need our vaccine inventors to have an eye for detail or anything.  Ahem.

So here we are: the Quackenboss Top 3 list of what VAXXED is not.

VAXXED is not anecdotal. This was a phrase I read in an early Hollywood Reporter review of the movie:  “It’s all effective, but it’s also purely anecdotal.” The first-hand Hear This Well parent stories of vaccine injury shown in VAXXED are not anecdotal, they are testimonial. The audio track between Dr. Thompson and Dr. Hooker is testimonial. Testimony is a true account of experiences that happened to you.  An anecdote is a story of anything that has occurred, no matter how plausible, no matter how exaggerated.  Brian Williams being forced down under fire in a military helicopter is an anecdote.  If your kid forgets how to walk and talk 24 hours after the MMR, that’s your testimony.  It’s evidence. No trial attorney would call a witness to the stand and ask them to relay their freaking anecdote.

VAXXED is not an anti-vaccine movie. For crying out loud, it’s a movie about how our government held a trashcan party where they destroyed documents that supported the horrifying conclusion that African American boys who were getting the MMR too close in time to other vaccines (mercury-containing Hep B and DTaP in the 90s, mercury-containing flu vaccine today, anyone?) were 3.4 times more likely to become autistic. Who wouldn’t want to know about this?  What if it was a trashcan party to destroy evidence about the US Government shooting down United Airlines flight 93 over Pennsylvania on 9/11?  What if it was a trashcan party to destroy documents about why the FBI was closely monitoring John Lennon? What if it was a trashcan party to get rid of evidence of the Tuskegee Experiment ever happening?  Wouldn’t you want to know that this is what our trusted government departments are doing?  Does that make you anti-airplane or anti-Beatles or anti-penicillin because you want to be informed about those things?

Besides, multiple times in the film Wakefield advocates for governments to allow separate vaccines for measles, mumps and rubella, as we had a few decades ago.  The film also suggests waiting until the age of three before administering the current MMR to a child.  How is that anti-vaccine?

VAXXED is not about Dr. Andrew Wakefield, Wakefield’s research, vindicating Wakefield, or any Wakefield agenda. VAXXED is about the dubious actions of senior scientists employed at the largest health department in America. That’s it. Wakefield didn’t invent them and he didn’t invent this cover-up; they did it all on their own.  I am sorry to be the one to say this, but there is not one way the Wakefield haters can spin this mess to blame its existence on Wakefield.  He has never worked for, and has no influence over, the CDC. These are your tax dollars hard at work pushing the vaccination program regardless of the collateral damage.

A few weeks after the CDC Whistleblower recordings were released back in the summer of 2014 I too wondered if Dr. Wakefield was spearheading the effort in an attempt to vindicate himself, his research, or his reputation.  In fact, I said as much to him in a private email. And because he’s such a stand-up guy, he addressed my concerns in the way he addresses everything: calmly, honestly, and without ego.  I’m going to share that email with you without even asking him if it’s cool, because I know it’s cool.  That’s how he is. (I did black out his email address and something personal he said to me in the first paragraph.) 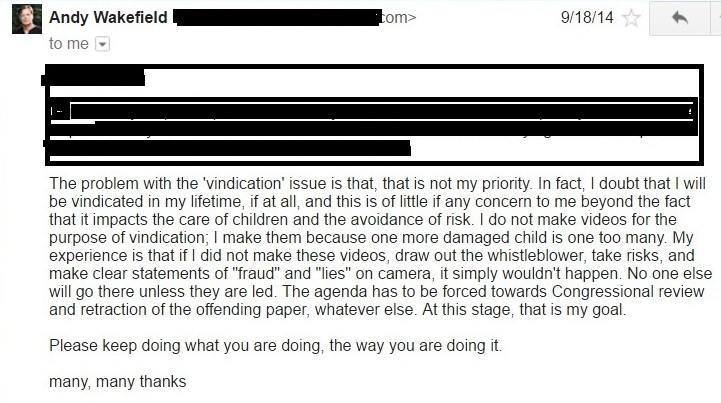 And while we’re on the topic of this “fraudulent” doctor and his “debunked” research, let’s get this straight:  when Wakefield was hauled before the UK Medical Council to defend his license, whether or not his research was “spotty” or “shoddy” or “fraudulent” was not even an allegation.  If it wasn’t an allegation then it sure couldn’t ever be a conclusion.

The biggest ethical issues he faced were the fact that he’d taken blood draws from neurotypical children in his own home with their parents’ consent (I just had a blood draw in my own home for a life insurance policy the other day; sure hope that nurse doesn’t lose her license), and that disabled children in the case series had undergone colonoscopies and intestinal biopsies that the board deemed unnecessary.  But Wakefield didn’t perform or oversee the colonoscopies– Dr. John Walker-Smith did.  And Dr. John Walker-Smith was exonerated by the court.

Every time you hear that Wakefield’s work was fraudulent or faked you’re hearing an anecdote.  You can read parts of the actual transcripts– that would be testimony— right here.

Lastly, to close out this post about what something is not, let’s talk about how the stories written about Vaxxed are not journalism. Journalism is the reporting of events and facts to keep society informed.  Jumping on the “anti-vax, dangerous, shut it down, fraudster, de-bunked” bandwagon and writing about a movie you’ve never even seen nowhere near qualifies as journalism. 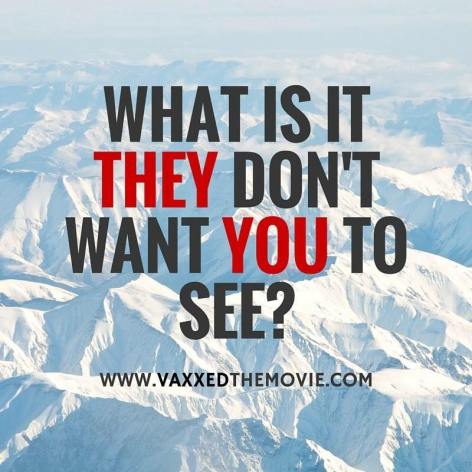 Emily Willingham at Forbes, I’m looking at you. Los Angeles Times, New York Times, and Time Magazine, I’m looking at you.  I know damn well that none of you saw an advanced copy of the movie before praising De Niro’s decision under duress to pull it from the film festival, and you were all chomping to tell the masses why it’s a dangerous movie.  How do any of you call yourself journalists?  You know what you are?  You’re prostitutes, and I’ll tell you why:  you get paid for sucking the virtual cocks of every pharmaceutical company marketing director that advertises with your “news” organizations.

George Orwell, the novelist who wrote 1984 and Animal Farm, famously once said:

Journalism is printing what someone else does not want printed: everything else is public relations.

Willingham et al are drug company public relations specialists, but they are certainly not journalists.  What other topics are there in today’s “news” that are so scathingly, baselessly sanctioned to be attacked on sight by our media?  Not police brutality.  Not African warlords raping women and forcing children to murder others. Certainly not GlaxoSmithKline when their European swine flu vaccine caused a devastating childhood narcolepsy epidemic in 2009-2010.

The sole topic that reporters maul like pit bulls cut lose from their junkyard chains is Dr. Andrew Wakefield, who has been mentioned in at least five major US media pieces per week for the last five years– literally in every article where someone dared to decline or question the safety of even one vaccine.

Dr. Ian Lipkin, writing a guest column for the Wall Street Journal, Dr. Thompson said four times in the recordings that yours was the worst autism study ever conducted, and that was after he called you an arrogant dick. Here, I made a meme for you from the Vaccine Whistleblower transcript: 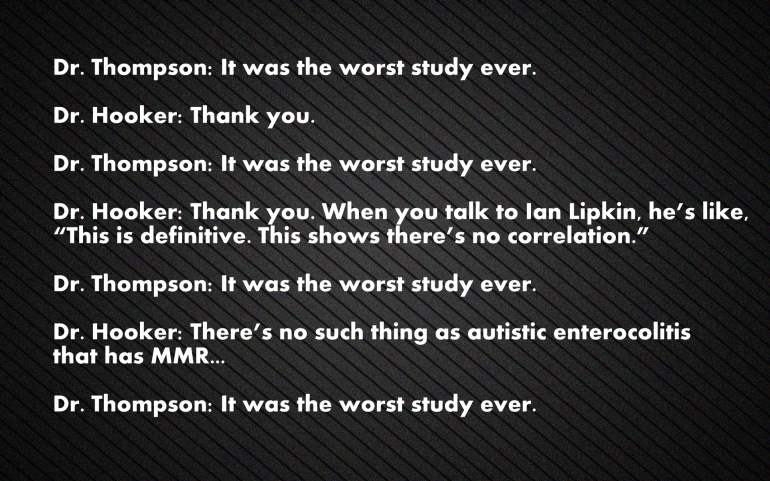 You like that? And Paul Offit, you are just as bad, even though you’re only posing as a journalist for a Hollywood rag.

Just for fun, here’s an interview that appeared in Trace Amounts where our pal Paul is referring to a later, 2007 CDC study on mercury that the CDC Whistleblower also conducted, and he says that Bill Thompson (not Dr. Thompson– they’re on a first name basis, he’s got so much love for this researcher) conducted a “wonderful study” that Offit thinks “stands as a definitive study.”  The hearts and stars coming out of his eyes for Bill Thompson are palpable. Total man crush on “Bill” and that wonderful, definitive study of his.

But just a little bit later in January of 2015, Paul Offit gave an interview you can listen to on the VaxTruth site (scroll down to the 3rd video, the red IHeartRadio embedded audio).

Over there Offit first comes on the program at 16:20 and then, at 18:15 when asked about Thompson as the CDC Whistleblower, Offit slanders Thompson’s character when he describes him as “This person at the CDC who obviously has some sort of psychological problems.” Like, as if he has no idea who this underling is, he’s never heard his name, he’s just some random schmuck who played a tiny role in some study Offit’s never heard of, and Offit can’t even force his lips to form the sounds to say the name “Thompson,” it is that vile.

Paul Offit, you are a two-faced liar who will say anything to defend the vaccine program when you know damn well that you have profited multi-millions from killing and maiming susceptible children, no matter how small of a subset they are.  I revel in the thought that you have woken up every morning for the past two weeks and have had to remember that Andy Wakefield is kicking your ass right now.  Sweet dreams, buddy.